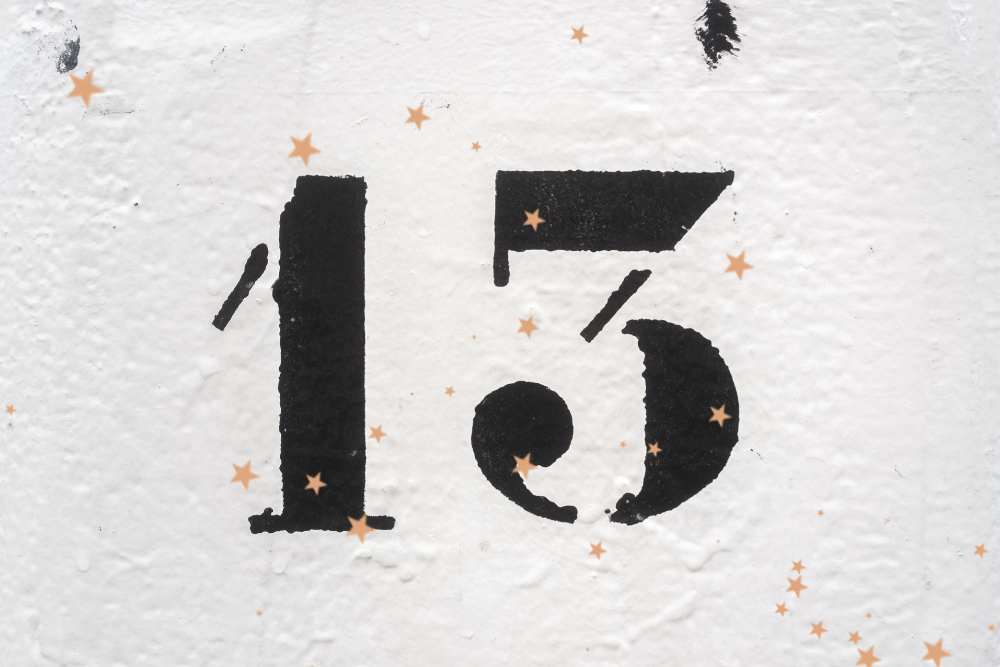 The number 13 tends to be dripping in bad luck and evil these days, but what is the real meaning and numerology of this number? Prepare for everything you’ve learned to be flipped upside down as I explore this number’s hidden magic and mystery.

Is the number 13 unlucky?

Friday the 13th is supposed to be a day of bad luck. There’s no number 13 car in Formula One. Scotland has no gate 13 in its airport. Some tall buildings are built without a thirteenth floor.

But when did this superstition with the number 13 originate?

The Last Supper was attended by 13 people, including Jesus, and the following day he was crucified. The Bible was the first ever book to be mass-printed, which meant it was able to reach an army of people. Unfortunately, incorrect, fictional messages like these were quickly spread. Because the Church controlled so many countries (and their people), anything conflicting with these ideas was buried.

But if we go back, the number 13 was always considered a powerful, lucky number.

We used to have 13 moons in a year instead of 12 months. The original US flag had 13 stars. There were always 13 witches in a coven.

Let’s explore the meaning and numerology of the number 13 in more detail.

What does the number 13 mean in numerology?

In classical numerology, you have to reduce double or triple-digit numbers down to one figure. To determine the numerology meaning of the number 13, you’d add 1+3=4. You can also look at 1 and 3 separately and use these meanings to understand the number.

You can use numerology to determine your personal number, either by calculating the number through your birth name or your date of birth.

The meaning of the number 1

In numerology, the number 1 symbolizes energy, motivation, momentum, power, and action. It’s about paving the way forward, setting goals, and being proactive to make things happen. The number 1 has masculine energy, while the number 2 symbolizes the feminine.

The meaning of the number 3

The number 3 symbolizes a childish, playful innocence. This is because 1 (masculine) + 2 (feminine) = 3 (the child). This number is all about creativity, having fun, being curious, and expressing love and joy. It has a youthful, positive, zesty energy to it.

The meaning of the number 4

The number 4 has a strong, practical, and conservative energy. Everything is black and white; there are no shades of gray in between. Logic rules above all else and risk is avoided at all costs.

Although we now live on a solar calendar, along with 12 months in a year that don’t really make any sense, it was not always this way.

The Aztecs’ year consisted of 260 days and 20 “months.” Each month had 13 days. They also viewed time in cycles of 52 years. Each of these cycles had 4 periods, and each period was 13 years in length.

The Pagans and Celtics’ calendar was based on the lunar cycle. Each year was made of 13 months (or moons), and each was 28ish days long (this is the length of one moon cycle).

As you can see, the meaning and numerology of the number 13 have long since been positive and powerful.

In tarot, the Major Arcana’s 13th card is “Death” or “The Reaper.” At first, this can sound alarming and overwhelmingly negative. But most of us misunderstand what death means.

We live in a world that has an endless cycle of life, death, and rebirth. Nature blooms, dies, then sprouts again the next season. Women experience this constant rebirth in our menstrual cycle. The moon follows this cycle, too—every 28ish days, she dies and is born again.

Death is nothing to fear. Death is about releasing things, habits, and fears that no longer serve you, shedding layers and skins so you can grow and transform. So the meaning of the number 13, aside from numerology, includes change and rebirth.

What Are The 7 Chakras And How To Unblock & Open Them

The moon mirrors our menstrual cycle and is feminine by nature (while the sun is masculine). So the fact that we used to live in moons rather than months and that there are 13 moons in a year means a lot for us as women.

The infinite life, death, and rebirth cycle, along with blood, fertility, and creation, are feminine cycles. This means that the number 13 holds significant meaning and power for women.

This is partly why the connotations of the number 13 have been twisted over the years. Everything that symbolizes power and strength for women was gradually ripped away from us during the rise and reign of patriarchy.

Angel Numbers are sequences of numbers that can appear repetitively in your life and are divine messages from your guides and angels. These help you connect with your higher self, access your intuition, and stay on your soul path.

Angel Number 13 is about remaining positive no matter what life throws your way. Because when we’re in a positive, optimistic mindset, we’re able to focus and think more clearly, navigate obstacles, and pursue our dreams. Angel Number 13 is also about letting go of the past and embracing a new beginning while leading with love and compassion.

If you regularly see and follow the guidance and meaning of Angel Numbers and numerology, don’t be afraid of the number 13! It is not a bad omen!

Ready to reclaim the number 13?

The next time you encounter the number 13, or any kind of superstition like this, think about where that belief came from. Was it from your parents? Did you learn it in school? Did you read about it somewhere?

Are you ready to release the fear and reclaim the true meaning of the number 13?