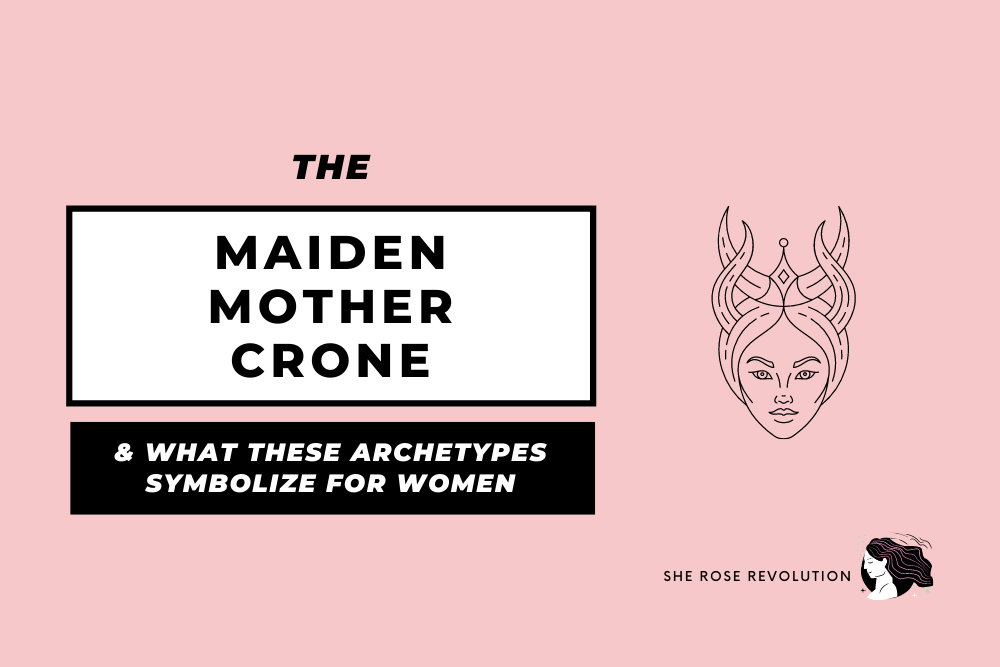 What does Maiden Mother and Crone mean? If you consider yourself a modern witch or engage in ritual or altar work (like new moon and full moon rituals), you might have come across this powerful phrase.

What do the Maiden Mother and Crone represent? 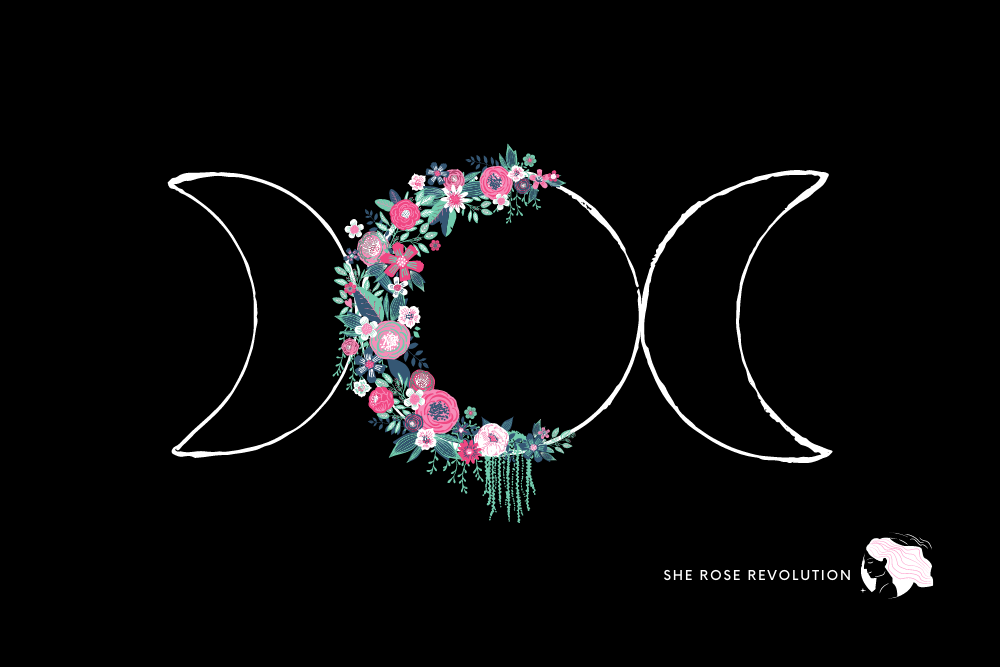 Wiccans, Pagans, and witches hold many sacred symbols as part of their lineage. One of them is the Triple Goddess symbol (also known as the Triple Moon symbol).

The Triple Goddess is a deity that represents the divine feminine and life’s cyclic nature. There are said to be three main phases that every woman cycles through in her lifetime, and these are: Maiden, Mother, and Crone. 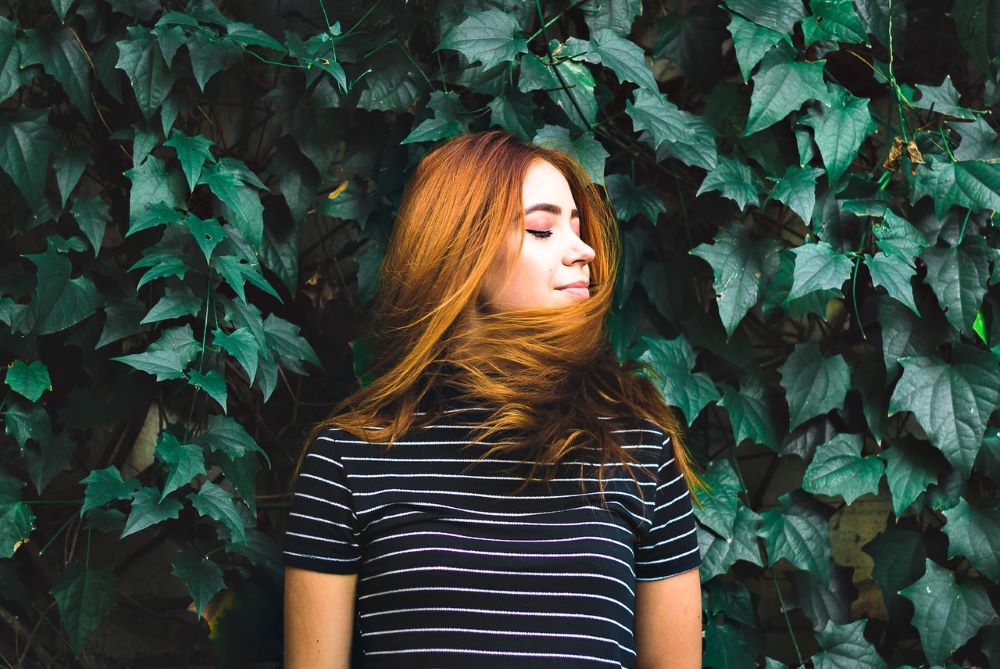 Also known as: The Virgin

The Maiden archetype represents the girlhood phase (teens and early twenties) of a woman’s life before transitioning to womanhood. She is youthful, innocent, and bursting with life force. She is optimistic, passionate, and adventurous.

In the Triple Moon symbol, she is represented by the left crescent moon, which is the waxing moon.

Typically, the Maiden is yet to find her calling in life, get married or have children. She’s wild, free, and enjoys experimenting with new ideas, beliefs, and ways of living. She also has a rebellious, rule-breaker side as she navigates this crazy world and stands up for the people, and causes close to her heart. 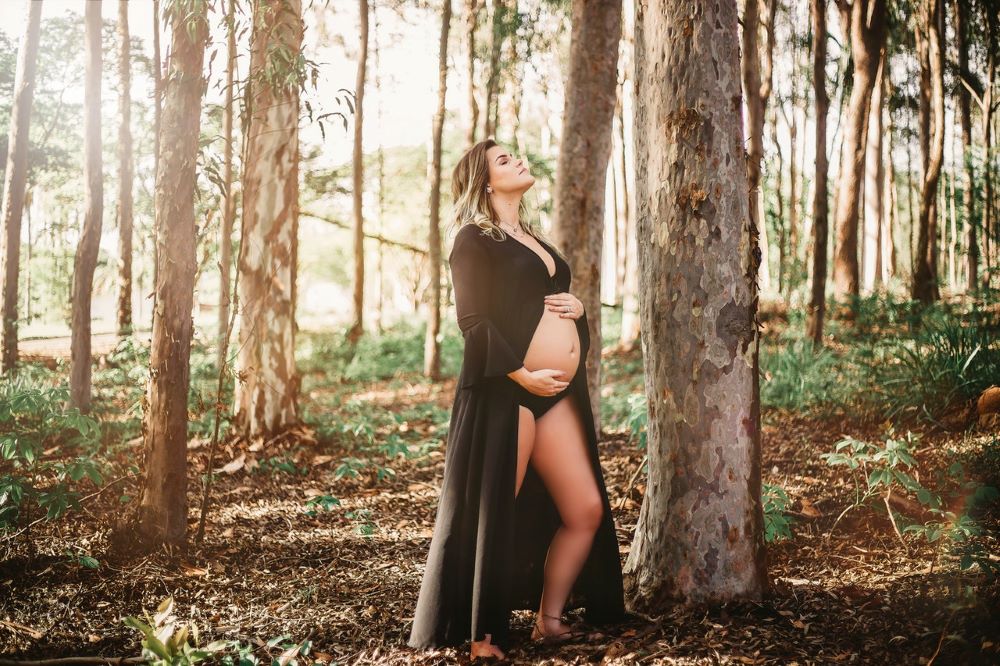 The Mother archetype represents nurturing, love, creativity, and fertility. She is in full bloom and has reached an expansion in an inner and external sense. Her love and energy radiate inward and outward, creating harmony in the giving and receiving of love.

In the Triple Moon symbol, the Mother is represented by the circle in the center, which symbolizes the full moon. If a woman follows a traditional white moon cycle, she will bleed at the new moon and ovulate around the full moon, which is when both the earth and women are most fertile.

Some people criticize the Maiden Mother Crone analogy because it appears to place women in rigid, outdated gender roles. For example, suppose you’re reading this now, in your thirties or beyond, and you don’t have children (because you don’t want to or can’t). You might feel the Maiden Mother Crone archetypes are limiting and lack inclusivity. But this is a very narrow-minded exploration of these archetypes. We can be mothers without having children. As women, we can create and birth and nurture anything. To look at the Mother archetype as reducing women to “reproducers” is to miss the true magic of her strength and power.

I don’t know if I see kids in my future, but I am already a mother. I am a mother to this business, She Rose Revolution, which you found your way to. And I have birthed multiple books and passion projects, and pieces of art. So I urge you to see this archetype in the fullest sense and think about how you embody her in your life already, despite whether you have kids or not. Maybe you are a mother to the school children you teach, the nieces and nephews you watch over, or the patients you tend to. 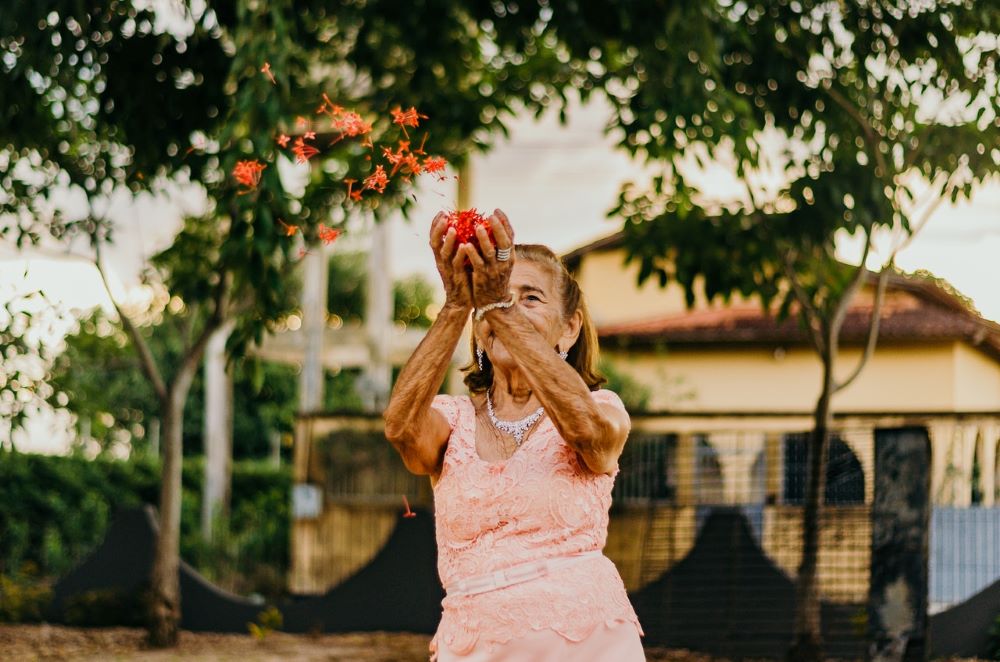 The Crone archetype represents the final phase of a woman’s life cycle. This is a time of deep growth, wisdom, and reflection. There’s a clear move from an outward focus and energy to an inward one, which is mirrored in how our physical appearance simmers down, but our inner senses are heightened. She slows down, becomes introspective, and is highly sensitive.

In the Triple Moon symbol, the Crone is represented by the right crescent moon, which is the waning moon phase. This is when the moon’s light is dimming as she reaches the end of another lunar cycle. The moon personifies nature’s life cycle of birth, life, and death, just as we women do. And this is no coincidence. Our cycle mirrors that of the moon. Women flow with the sacred rhythm of mamma nature.

Today, the word Crone has negative connotations, but this was traditionally a term of respect used for a wise, older woman.

You can read more about the Maiden Mother Crone archetypes here:

Maiden Mother Crone – what is the fourth archetype? 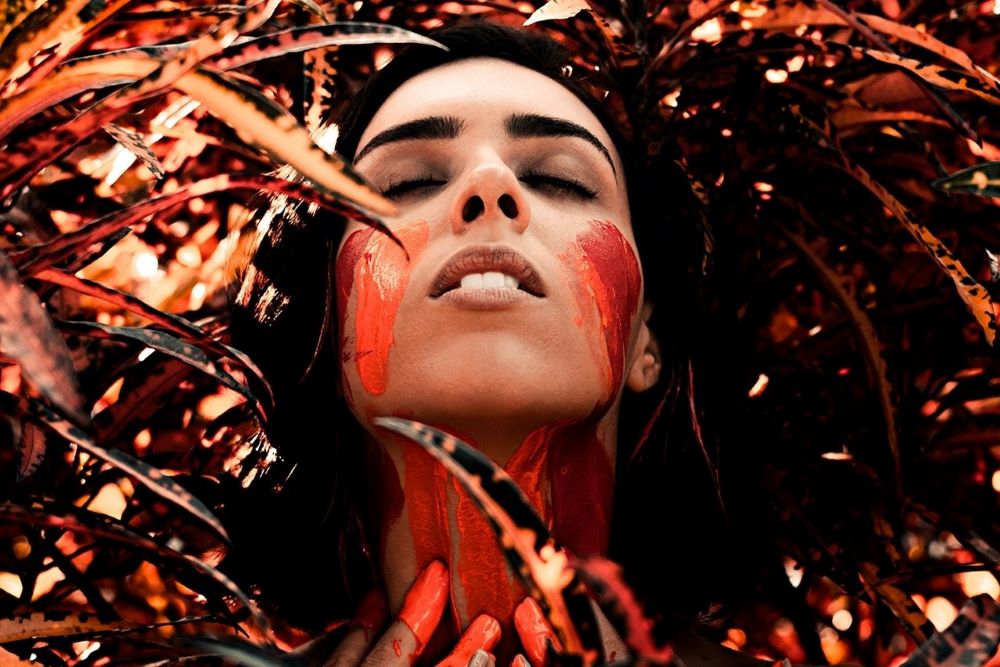 I, along with many others, believe there is a fourth archetype that sits between the Mother and Crone. This archetype is known by many names, including Wild Woman, Medicine Woman, the Enchantress, or the Witch.

It makes more sense that there are four female archetypes because there are also four phases of our menstrual cycle, four main phases of the lunar cycle, and four seasons.

The primary reason why we suffer so badly with PMS and period pain is that we are repressing Wild Woman, and with her, we are repressing our true emotions. When we do this, these emotions fester in our subconscious, they swell in the darkness, and they will not be resolved until we bring them to the light and confront them.

If you want to learn more about the Wild Woman archetype and how to work with her, check out this post:

Journey To Meet Your Wild Woman

Where do these sacred feminine archetypes originate from? 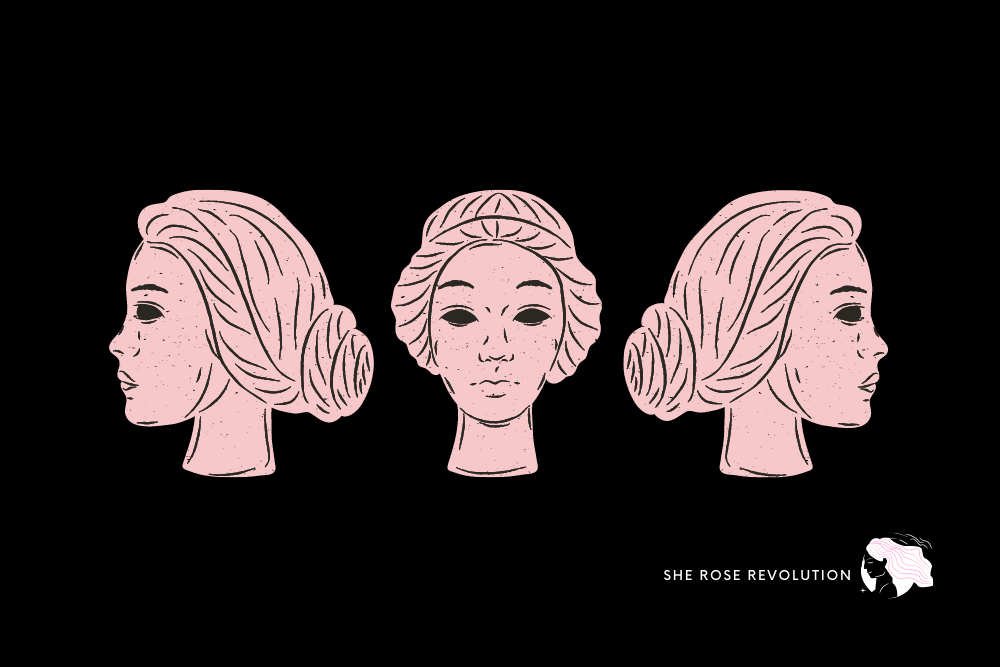 Most ancient Goddess cultures did not have separate Maiden Mother Crone figures but had triple Goddesses (single deities) who embodied all three aspects. For example, Hecate is a triple Goddess because she represents the three-way crossroads between the seen and unseen worlds.

The Maiden Mother Crone theory was popularized by Robert Graves and his book The White Goddess, in which he notes there was an archetypal triad of Goddesses in ancient cultures.

How society responds to the Maiden Mother Crone archetypes

In our patriarchal society, it is no surprise that the Maiden and Mother archetypes are the only versions of womanhood deemed acceptable. Today, a woman’s value is still heavily attributed to her physical appearance, beauty, youthfulness, and ability to reproduce. Other aspects of the Maiden, such as her rebellious streak, and other aspects of the Mother, such as her creativity, are not valued or praised because these traits and skills make a woman less easy to control and manipulate.

As we move to the Wild Woman and Crone archetypes, women are increasingly vilified and shunned. Any display of emotions deemed negative by the patriarchy is met with the statement, “it must be her time of the month.” Women are constantly labeled emotional, irrational, and crazy, which leads us to hide and bury our true feelings (which harms us). As we age, we feel we are literally disappearing—society does not attribute any value to an aging woman. But women worldwide are starting to reclaim the title “Crone” and the wisdom, vibrancy, and evolution that are synonymous with the later years of a woman’s life.

The four female archetypes & how to work with them

As I mentioned earlier in this article, the Maiden, Mother, Wild Woman, and Crone archetypes correlate to the moon phases, the menstrual cycle, and the seasons. Here’s what this looks like.

I want to point out that your menstrual cycle might not follow this pattern, and that’s completely okay. For example, when you’re bleeding, it might be a full moon in the sky rather than a new moon. Every woman follows a slightly different cycle. What I’ve outlined above is merely to show you how all of these cycles are interlinked. We, as women, are inextricably linked to nature and the rhythms of the earth. This is one of the greatest gifts of womanhood.

Which of these feminine archetypes feels most potent in your life today? Which one do you want to embody more of?