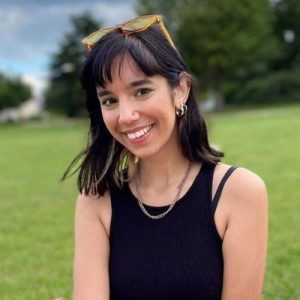 Zaynab likes to live her 20s every day as they…

Here’s Why Dating In Your Thirties Is A Beautiful Gift

Being a Muslim woman in the western world can be daunting. There is this notion that if you’re practicing, you’re oppressed. You almost find yourself conforming to the expectations of what freedom should look like. Assimilating to the western culture by denying your own, by hiding the parts viewed undesirable.

When I was around 9, my best friend wore the hijab, and of course, 9-year-old me had to copy. Despite choosing to wear it on a whim to match my best friend, I don’t regret my decision.

I grew to learn more about my religion, how it advocates for women, and the sense of peace it gave me, knowing that I belonged to this community. I would walk down the street and see another Muslim woman in a hijab; she’d greet me with an ‘as-salamu alaykum’ (peace be upon you) and a warm smile. This feeling of belonging gave wearing it a sense of comfort.

Amongst older generations, the line between religion and culture blurs. Some young Muslim girls feel inclined to wear the hijab as an obligation, but with each passing generation, this pressure eases and comes with it the ability to make the decision for themselves.

Personally, at the time, I didn’t really understand or realize the significance of such a simple piece of cloth. But unfortunately, I learned very young the implications it would have for my future. It would mean being afraid to walk past older men who would sneer and having to desensitize myself to racism passed off as a joke, only funny at my expense.

I wore the hijab until I was around 16. My reasoning to take it off was because I didn’t believe I was fully committed to it. I wanted to wear it with complete confidence that I was doing it for the right reasons. It was in my teen years I began to occasionally take it off. I thought that I couldn’t be pretty without my hair on display. I wanted to fit in, to be noticed.

One of the hardest parts of being a teenage girl is this ‘ideal’ beauty standard pushed onto us. Growing up without any form of representation, I thought the only way to reach it was in these stolen moments without my hijab. But I also had immense respect for my religion and the hijab; I didn’t want to make it a disposable accessory. I decided to remove it permanently with the intention that I would feel confident enough in myself and my beliefs to commit to it one day.

What I remember most about this transition was being stopped by a teacher at school. He took me to the side and asked, “How do your parents feel about this?” At first, I was confused. I couldn’t understand the relevance of my parents. Why would they care what I choose to put on my head? This was followed up by “You look happier,” and it was at that moment I realized this false narrative was so ingrained in western culture. He believed that taking off my hijab meant I was happier and, by association, freer.

As I grow older, I realize this isn’t an anomaly but rather a pattern. Yes, it is true that in some countries, women do not have the freedom to exercise their own rights and make a choice about whether to wear a hijab. But why is it less offensive to insinuate that any woman wearing a hijab has been forced? I have come to realize that it is just islamophobia repackaged. They’ve weaponized the hijab. They have taken away from the beauty of it. Claiming they’re freeing us from the shackles of oppression when in reality, they’re creating a new path of oppression.

It is heartbreaking to see women be modified, controlled, and told what they can and can’t do.

I simply want to exist freely, without comment on my appearance and religious choices. I want to be able to see young girls happy and carefree in their hijabs. And I want to see TV shows with representation that doesn’t involve this fetishized trope of having a hijabi woman lose her headscarf as a plot point. I am tired of this caricature of Muslim women, the portrayal that we are empty and silenced by a hijab.

Over the years, I have found myself losing my connection to my religion. By removing my hijab, I thought I was making the right decision because I wasn’t ready to commit to it. But in doing so, I lost the part of myself that connected me to my community. It wasn’t because I wasn’t welcome, but rather that I felt like a fraud because I traded in something that brought me so much comfort to fit into modern-day society.

Don’t get me wrong, I’m still absolutely frightened at the thought of making that transition back. What would my colleagues think? Will my friends think I’ve changed? But one day, I do hope to be able to wear it again. When that day comes, I want to wear it with confidence and happiness.

I am not a letterbox; I am a person.