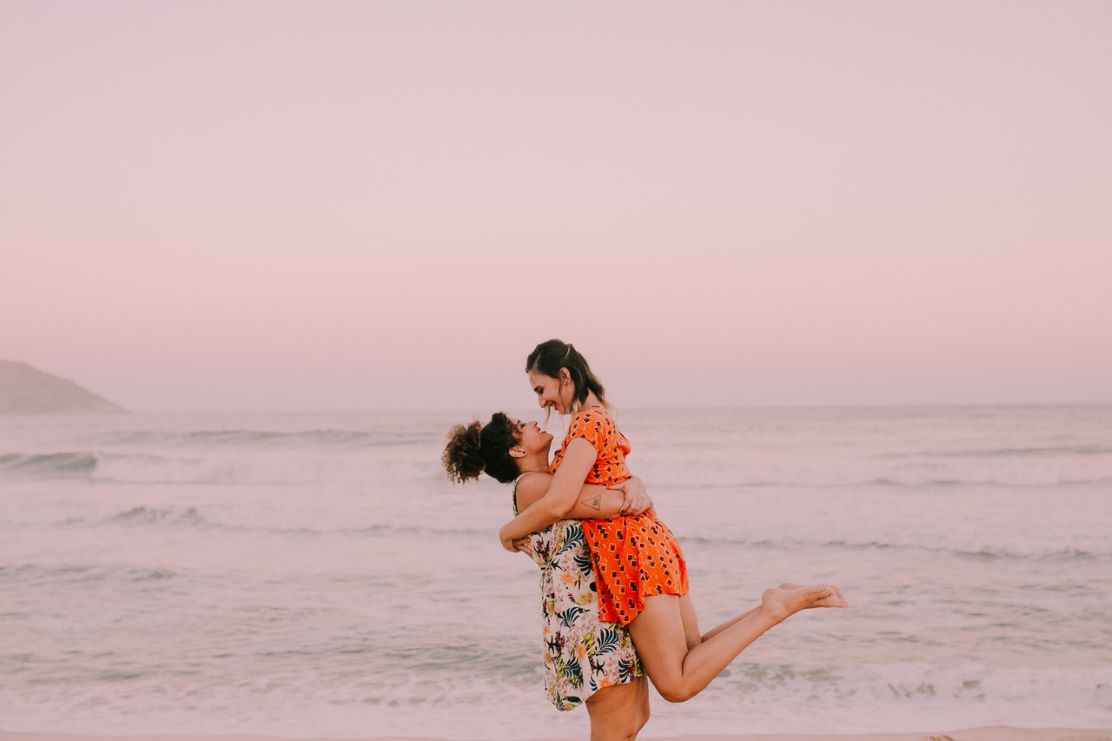 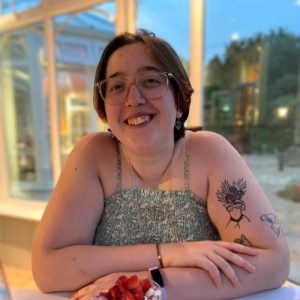 Hi! I'm Zara and I'm a queer writer who wants…

I Am Slowly Reconnecting With The Fire Of The Feminine

I’m a genderfluid lesbian whose pronouns are she/they. It took a while to get to this point of confidence and comfort within myself. But now that I’m here, there’s really no better feeling than being utterly myself. I’m grateful that I no longer have to deal with the countless days of confusion, the hatred I had for feeling the way I did, and the pure unhappiness that came with pretending to be someone I wasn’t.

I’m now on a long journey of endlessly coming out to every new person I meet, but, strangely, I don’t mind. It’s something I’ve come to love about myself—so I’ll say it a thousand times over if I have to.

When I mentioned it took me a while to get to this point… it took twelve years. For some, that probably won’t even sound that long, and to others, it’ll seem like a lifetime. But it was a grueling 6,307,200 minutes for me.

It all started in primary school when I was nine years old. All the girls in my class wanted boyfriends, and those who didn’t were because they already had one. I remember not finding any of the boys interesting or cute, wanting to be more like them than with them.

Me and my friend, Lucy, had a conversation on the playground one day about boys. I didn’t know it then, but that conversation would change absolutely everything.

“Abby has a boyfriend, and so does Hannah,” Lucy said to me while we were by the gates of our playground at breaktime.

“I know it’s so cool for them,” I said, not really caring about the topic of conversation.

“Do you fancy any of the boys?”

“No, I don’t think so.” This led Lucy into naming every boy in our class to see if there was one I indeed liked, but I didn’t, and neither did she.

“Okay, do you fancy any of the girls?”

This made me turn a light shade of candyfloss pink and dart my eyes into hers with shock. As a nine-year-old, I had never heard of the word gay before. I didn’t know it was possible for people of the same sex to like each other. I also didn’t realize that it could be a problem.

“I, I um find some of the girls cute,” I uttered shyly to Lucy, eager for my answer.

We then named some of the girls in our class with shy smiles on our faces. I didn’t realize it back then, but now I know it was my first moment of acceptance. Being able to openly talk about cute girls I may have liked. It was the first stepping stone.

“There is one girl I have a crush on, but it’s embarrassing, I don’t want to say.” Lucy tilted her head to the ground as to not make eye contact.

“I think you are really cute…” My candyfloss cheeks turned to apple red with the fear of what I’d just admitted to my best friend.

The rest of the conversation is a blur to me. All I know is, we were two very happy, carefree little girls who had just admitted to having the purest crush on each other. That was my last ever moment of childlike ignorance when it came to my perception of love. What happened next made me repress my feelings for five years until I finally dealt with them again. Lucy and I got even closer than before. We weren’t girlfriend and girlfriend, as both of us were very confused and only nine years old but we were very attached to one another. People in our class started to notice, they began to laugh at us, mock us, and then one day…

“LESBIANS, LESBIANS, look at Zara and Lucy; they are lesbians for each other!” There it was. The word I had never heard before would define me for the rest of my life.

We went home that night and googled what a lesbian was. Just like that, our bubble of innocence was popped, and we suddenly had the weight of the world sitting on our chests. Gay, Lesbian, Homophobia, LGBTQ+ rights, Faggots. So many words that just five minutes prior, we didn’t know existed.

The next day we both went into school feeling strange. We didn’t know what to do with these new feelings our classmates and the internet told us were wrong. So, we went to our school guidance counselor. The conversation was brief. I don’t remember it perfectly as it’s something I’ve tried to block out over the years, but it went a little something like this.

“Miss, we need to talk to you about something,” I said.

“Zara and I think each other are cute and don’t know what it means. Are we lesbians?” Lucy said.

“Oh, um, well. I don’t think I’m the person to talk to about this, that’s not normal girls, and I wouldn’t tell anyone else about this.” That was it. She walked away from us down the corridor and wouldn’t give us a second look. We were left feeling more confused than ever.

Now that I’m older, looking back at that conversation still stings. I don’t like to dwell on it much, but at the time, it killed me. I thought I was a freak. I was scared. That guidance counselor could have been the difference between me hating myself for the next five years or giving me that first moment of acceptance I very much craved.

After that scarring interaction, Lucy and I vowed not to tell anyone about what we were going through. But, being nine-year-olds, that didn’t last very long. We had one other close friend, Rachel, who knew something was going on. We had been acting strange lately, and it wasn’t that hard to figure out. We ended up telling her everything and made her promise not to tell anyone, especially not her mum.

A few days later, I had one of the worst nights of my life. Rachel, Lucy, and I all met on our street. The first thing Rachel said was, “I’ve told my mum, she’s calling your mums now to come around for a chat.”

All I remember at that moment is wanting to throw up. Thoughts of being disowned consume my mind. Lucy and I had the same look on our faces, one of pure fear. We all walked to Rachels’s house. When we arrived, we all squeezed onto one sofa and held each other’s hands. Then we waited. Every second felt like hours. The silence surrounding me contradicted the shouting thoughts in my mind. Then the doorbell went. Our parents entered, and it had begun.

If You’re Not In Love With Your Life, Change It

They all went into the kitchen, not wanting us to hear what they were talking about. It didn’t work that well, though. It was a mixture of yelling, crying, and speaking. I don’t remember exactly what was said, but I know it caused my stomach to turn and tears to fall from my eyes. We all sat sobbing together, Lucy and me out of fear, Rachel out of sadness for us.

Our parents finally came in after a while. They said they were upset with us for keeping this a secret, how we should have told them, how we shouldn’t ever have to talk about this again. We all cried some more, promised this would never happen again, and then I walked home with my mum. We didn’t speak a word the whole way. Silence has never been so loud.

That’s how it took me five years to reach a point of even facing it again. The three of us remained friends. We never spoke of the situation ever again, not to this day. It’s something that will stay with me forever, even if it feels taboo to talk about it. It’s a part of my journey; the good, the bad, and the ugly.

As a fourteen-year-old, I had more of an understanding of the world and the issues I faced for feeling what I did. It was still the most terrifying situation, but I was ready now. I had dated my fair share of boys in my early secondary school years to try and force my gayness away. Safe to say it didn’t work at all. I felt more looking at pictures of the girls from Fifth Harmony than I did the whole time I dated a guy.

When I thought about falling in love, it was always a girl.

The thought of holding her soft hands, her gentle embrace, her tender, and pure love. It made me swoon. I got the type of butterflies you only experience on the rarest of occasions. Thinking about loving a woman felt like the rarest and most beautiful sunset; warm, pretty, soft. I ached with want for a kind of love that seemed forbidden.

Feeling this way and keeping it a secret became too much, so I knew I had to come out. I started with my closest friends. They didn’t care in the slightest and said they would love me no matter what. Hearing those comforting and reassuring words for the first time ever is something I’ll always remember and be grateful for. It helped me grow so much as a person.

Next was my close family. They also didn’t really care, which in a way was kind of nice after being so worried about it.

After getting all the main people out of the way, I couldn’t stop coming out! I was so excited to tell anyone and everyone. It became a massive part of me that I was finally comfortable with, so I never wanted to stop celebrating it. I still don’t to this day.

Now I’m twenty-one years old. A very long way from the petrified nine-year-old who liked girls and wanted to be like the boys. I’ve learned so much about myself over the last twelve years, and I wouldn’t change anything about my experience.

Gender is a social construct. I’m allowed to dress however I like and be whoever I want to be because that’s what makes me comfortable. I’m allowed to love girls the way I should love boys because all love is pure and beautiful. It shouldn’t matter who I fall in love with.

So, it may have taken twelve years and a long 6,307,200 minutes, but it was all worth it. I love who I am, I love my story, and I can finally say with all my confidence, I love women and my gender fluidity. If my younger self could read this, I’d let her know it’s all going to be okay.

You have incredible friends and family who love you no matter what. The world is becoming such an accepting place. You’ll meet the girl of your dreams and experience the type of love you’ve always wanted. Lastly, you are strong. Keep fighting; it’s all worth it in the end.