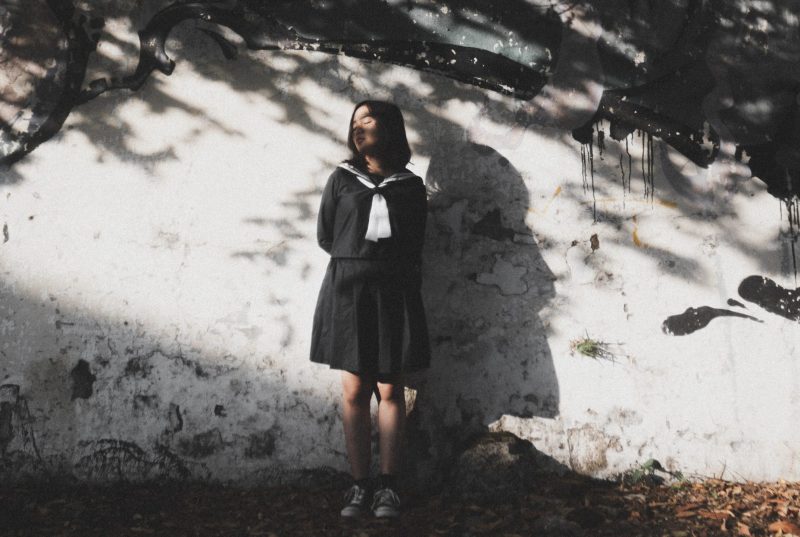 It’s Time To Forgive Yourself

I was about 15, sat in French class with my friend Stephanie.

Our teacher was a strict, sometimes frightening, French lady. She wanted the best from her students, and she didn’t tolerate anyone stepping out of line; and I respected her for that.

She was such a great teacher that she managed to take me from a C grade to an A grade in less than two years. I was blown away when I opened my GCSE results and found the letter A staring up at me next to the word “French.” But that’s another story.

One afternoon, we were sat in class, and she erupted at a blonde girl sat at the front of class. We’ll call her C.

C was loud, often obnoxiously so, and definitely not my cup of tea back then. But even I felt sorry for her when an intimidating French woman started shouting at her in front of our whole class.

It was 15 years ago, so I can’t remember the exact words that were exchanged, but it went something like this:

“Do that button up on your shirt.”

“What do you think you’re doing going around wearing your shirt unbuttoned like that? Don’t you know there are male teachers working here? Do you know what they’ll be thinking; how they’ll be looking at you?”

Imagine those words being screamed in someone’s face, and you’re well on your way to picturing what I witnessed.

At the time, I couldn’t help but agree with her. Because I didn’t know any better.

I knew C was always causing trouble and bending the rules, and she liked attention; particularly male attention. Dropping a few buttons on her shirt seemed like another way for her to draw that attention to herself.

In a slight state of shock at the way she’d just been spoken to, she slowly proceeded to do one more button up on her shirt, with the entire classes eyes on her.

And this was one of many incidents that I witnessed at school, of teenage girls being sexualised without even realising it.

You can’t wear a brightly coloured bra like that under your white shirt. Everyone can see it.

Button your shirt up to the top.

Those shoes are too high, they’re not appropriate.

Your skirt is too shirt. Roll it down, or I’m sending you to the lost and found to change it.

Go take that make up off in the toilets.

While I understand that a dress code was being adhered to (although I never believed there should be one); looking back, I can see that what we experienced as girls went far beyond that.

We learned to feel shame around our bodies; the way they were changing and developing as we became women.

And unknowingly, we were learning that it was our responsibility to cover ourselves up, or invite looks and stares and leers and fuck knows what else our way. Because boys and men can’t control themselves. Obviously.

That’s rape culture. And that’s what we all inadvertently learned; both the girls and the boys.

I only realised that a few years ago.

And for the most part, our parents reinforce those damaging ideas at home.

When a girl reaches that teenage, figuring herself out, body changing stage, she inevitably wants to start wearing different clothes; clothes that accentuate her new found curves and lines. I know I did.

Our parents don’t like it. They fight against it. They tell us to go back upstairs and get changed otherwise we’re not going out. Or they tell us we look cheap, and that we’ll attract the wrong kind of attention.

Once again, that’s rape culture. Placing the blame on girls and women, while ignoring the twisted behaviour and actions of boys and men.

And most of our parents have no idea that they’re perpetuating it. They falsely think they’re protecting us from our own sexuality, which the world—thanks to modern day religion—has deemed dangerous.

But all they’re really doing is teaching us to feel shame around our beautiful bodies and our awakening sexuality.

Most of us don’t even know what’s happened; and those of us who do have a tough time re-writing those toxic thoughts and beliefs with empowering ones.

In fact, we need to stop sexualising all girls and women, period.

We need to stop spreading and injecting fear and shame into our girls, around their bodies and sex.

And we need to be teaching our boys that women are not sex objects that exist on this earth, solely for their pleasure and to reproduce.

If you find yourself as a girl at school, or at home, being exposed to these toxic ideas, and being sexualised—the way that I was, and every other woman has been—I want you to know that you’re doing nothing wrong.

Your body was not made to be covered up.

Your body is not a dangerous weapon.

The way that men (and women) react or respond to it is nothing to do with you.

And I want you to know that you have a voice, and you can use it. You can speak up, and voice your opinions, and be a leader for change.