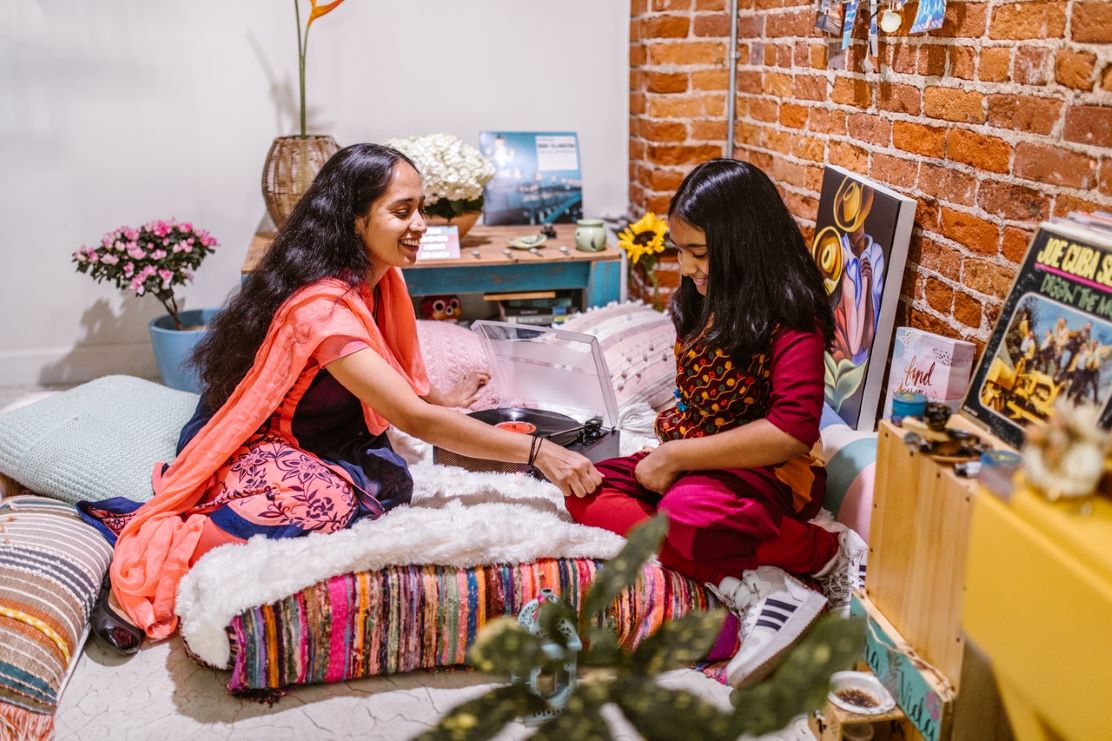 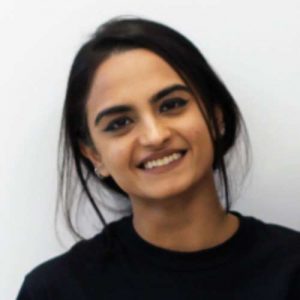 Brinda Gulati has an MA in Writing from the University…

My mother says that the mid-twenties are the middle-age years of my skin. In some way, then, we are the same age, separated only by the two decades in the Gregorian calendar.

I thought it was the heart that bound us, but I’ve come to realize that we burden our hearts with a lot of mediocre poetry and the mundane repetitiveness of beating. We exhaust its reserves with our anxieties and expect it to speak to us when all the answers are in its physical cadence.

The heart is a very small organ, unlike the skin. The expanse of my skin and my mother’s is bound by a simple activity: applying sunscreen after a thorough face wash in the morning.

The first time my mother, my sister, and I went for swimming lessons in a club close to our house, our bags had all the same trimmings: towels, swimsuits, flip flops, and discardable hair ties that had lost their structural integrity. My mother’s bag had a big blue bottle of sunscreen for all three of us.

I remember seeing women dressed in their speedos, their hair protected from the chlorine by the squeaking spandex skull caps. They had visible tan lines on their shoulders from the straps of their swimsuits, as if their skin was screaming that it used to be something else, somewhere else, anywhere else, not submerged in the chemical waters of public urination.

My mother would then make us sit on the lawn chairs and lather our arms, legs, and backs with palmfuls of sunscreen. My complexion was darker than both of them, so I would be more diligent with rubbing in the magic lotion. Sometimes I was teased for my dark skin at home, but it didn’t bother me much. Still, it bothered me enough that I didn’t want it to get darker.

I remember seeing a woman practicing her breathing underwater and coming up for mouthfuls of fresh air before submerging herself wholly. In between the splashes of water, she was counting…three…gulp…five…gulp…seven. She also knew of the magical sunscreen; her face was paler than an emaciated Victorian infant. Her jawline separated from her neck by a clear white line, as if someone melted chalk onto her face to study the anatomy of her body. I smiled at her and pointed to my own face to signal, “it needs to be rubbed in more thoroughly.”

I figured she was old enough, maybe in her late twenties, to come to the pool without her mother as a chaperone. Perhaps that’s why she wasn’t as thorough with the rubbing in of the sunscreen.

I looked up to see my mother giggling at my sister flopping around on an inflatable noodle and wondered that if it were not for mothers, if we were always left to our own devices, would we do everything just enough to get by, never as thoroughly, never as protectively?

In 2011, my parents decided that it would be good for my personal growth to attend summer camp abroad—certainly not in India. You could never trust the men or the equipment here—rather, men and their equipment.

I don’t quite remember how we arrived at a decision. But as a family, we all agreed that I would study abroad after finishing school. I excelled in academics, and I was the oldest child. I was purported to follow very closely in my grandfather’s footsteps, the footprints of whom my father mistook as his own.

Either way, I was being readied to be kicked out of the nest in the next year or so. I suppose this was an exercise in warming me up to white skin and speaking English more frequently and eloquently. The same month I was to fly to Switzerland to attend camp in the snowcapped Alps; we also visited Istanbul and had breakfast overlooking the Bosphorus for a week. My friends, their parents, my teachers—everyone thought that I was living the most charmed life of all. I had everything. I had everything that everyone else wanted. From the outside, I know it certainly seemed that way.

I didn’t know how much electricity cost until this past month, so you’re not wrong in assuming that as a teenager, I was always jet-setting, had the best grades, the skinniest body. I wore sunscreen to school every day and enjoyed its pink smell on my freshly washed body in the backseat of an air-conditioned car.

A semi-charmed kind of life, indeed.

There are a lot of howevers to be inserted in this space here, but I won’t just yet.

The truth is I remember very little of this life apart from I was always light-headed and almost always crying to my mother.

I would cry about my stretch marks, my thighs, the dark circles that people said I shouldn’t have as a child, or that my father would ask me to lift my shirt to show him my flat stomach.

My mother didn’t know the last clause until two years ago, and I didn’t know how to put it into words.

I also didn’t know how to tell her that I could never hug my father because he would press my chest firmly to his. I didn’t like the way he would brush his beard on my naked shoulders and ask me to sit on his lap.

So, I cried about the mean girls in school, the ones who would count the pimples on my face. How I wouldn’t score the highest marks in my next exam. I didn’t know how to tell her that I couldn’t wear sleeveless tops anymore because of him, so I cried to her about the number on my weighing scale. I couldn’t use words, so I told her everything in numbers. The numbers weren’t significant, but I made them my whole life. I barely wore shorts or skirts any more, which meant that the sunscreen reserves didn’t need replacing as quickly.

Since I was starving most of the time, eating oatmeal that tasted like boiled Velcro, and drinking thermoses full of tongue-burning jasmine tea, my body would give in even before I could actively heed my mother’s advice.

I spent much of my childhood in sleep, and for that, I am grateful.

I am grateful that my body’s locks and keys would twist in on themselves until I had slid into a coma in the afternoon sun.

The body I have now is always flashing lights at me. The buzzer in my ear bone won’t stop ringing because of what I did, because of how I treated it. The discomfort of living inside a home with a devil with no horns and inside of a body whose edges denied lapidary made me retreat inside my head, which was a bitter host.

I held onto things that allowed me the freedom to roam about in secret corners inside myself, unbeknownst to the wardens who violently ejected my daydreams with crashing cordless phones.

For the most part, I knew one thing was for certain—that I was living in temporary hell. A kind of limbo where you wait while the divinities decide to push up or down on the elevator once and for all.

My childhood home was the suspended reality placed delicately between heaven and hell, with strings to hold it in place so that this plane of existence never touched either side.

There Is No Shame In Choosing Therapy

Then I would think of how heavy the strings must be, or surprisingly featherweight, to show me glimpses from either side.

At this point, I’m not sure I would have chosen either—I must stop in my tracks here.

The choice wasn’t mine to make.

My days were hungry, depleted reservoirs of comatose sleep and prison food. I would go to family dinners and meet relatives here and there, keep flicking pages until I ran out of homework to do, and look at photographs of food online to somehow absorb its taste through my seeing orbs.

Every day entailed a big decision, so each day called for a long, sound nap. After seven hours in school, the sunscreen would come off in paste-like streaks mixed with sweat. I never wanted to stay home, especially on the days my father wanted to surprise us with valuable coupons of his time—time that could’ve been spent making money. But no, he was a dedicated father and provider who complained about being a dedicated father and provider.

I have learned other things from my mother, almost too many to count, but those are intangible, only discernible between the lines. I call them passive lessons in wisdom: those on fortitude and strength, on loss and home, on belonging and abandonment. However, the lessons that are irrevocably hers are lessons of active wisdom—like the wisps of silver hairs in her hairline are what I can see sitting on the shelf above my bed and in the snooze button on my phone.

Some nights that I can’t sleep now, I fear that it’s insomnia, as if I still have his woolly words tied to a magnet dropped into my stomach. A compass whose needle has stitched itself into my unfaithful fibers.

My mother says that this pink pouch of guilt inside of me isn’t a totem, that somehow, I am my own anchor, drowning and saving my body at the same time.

Dr. M says that it’s Alice’s rabbit hole, and I’m free-falling into my own body with a gentle thud and a crash landing that cushion and pulverize my bones into chalk dust.

I suppose I remember the blue bottle of pink lotion and the long afternoon naps because of a simple coincidence—the absence of the patriarch.

My father once compared himself to Newton, although he’d never been fond of apples, but those crimson crunches are all that I ate for several weeks one year. He whistled secrets into the wind, scribbling on imaginary chalkboards in the air like my grandfather used to, with the frantic bounce of his left leg. This unfortunate tendency lives in my body too. I now realize that he must have thought all along that our house wasn’t limbo, instead, an express train ticket to hell. And if he was on his way, he would need company in the ghoulish limitlessness.

I knew that one day, I would never see him again.

I would drive by his house one last time, my skin awash in the pink glow of sunscreen, on the road to heaven or hell. Nonetheless, sound sleep at last.